Planning a wedding is exciting – but SO overwhelming! I’ve been there, so I totally get it! All of these choices and deadlines can feel like a ton of pressure – plus knowing there are no do-overs can add a bit of stress to the mix.

When you hire me:

You can breathe. No need to worry.  I will be your set of eyes for the moments you won’t get to see; your handsome groom adjust his tie just before making his way to the ceremony, mom wiping away tears as you walk down the aisle, the moment you first lay eyes on each other, the gleaming expression on your faces as you begin to realize you are married to the love of your life, the reception décor laid out exactly how you had envisioned it, your guests laughing together.

All the attention, time, and money that you pour into your wedding day will prove to be well spent. As you view your photos, they’ll serve as a reminder of a day that was even more amazing than you remember.

Not only am I here to photograph the first day of your marriage, but I’m here to guide you and to help make your wedding day visions come to life. I’ll help you design a timeline that fits your wedding like the perfect pair of jeans and coach you through your wedding jitters.

I’m here to make this planning experience a breeze for you! Click through my blog to find tons of resources blog that will help you with the planning decisions, ensuring that your photography is all that you’re hoping it will be, plus allowing you a bit more time to focus on being engaged.

If you haven’t already, take a peek at a few weddings, then send me an email so we can get together and talk about ways to make this the most memorable day of your life.

My approach is to capture weddings with a blend of photojournalism and casual portraits, documenting moments as they unfold. I strive to focus on the emotional parts the of the day, offering guidance during formal photos, while encouraging interaction between my couples and their loved ones.  I avoid cheesy poses and photo editing trends, in the effort of create photographs that won’t feel dated decades from now.

I LOVE to travel! In fact, during flights home, I’m already planning where I would like to go next! I’ve been to Vegas 10 times and have visited 15 states and can’t wait to add more to the list!

I’m married to an incredibly supportive guy. Even after nearly 15 years together, I still get butterflies and feel special when I wear his t-shirts.

When I’m just hanging around the house, you’ll find me in pajamas. Hearing the Mister Softee tune brightens my day instantly, I still own a flip phone (and don’t want to give it up!), and believe you can never have enough sharpies. Why I'm A Wedding Photographer 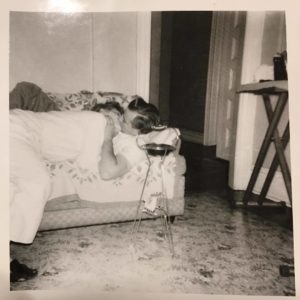 My nan met my pop when she was in her late teens. Oh, my pop swept her off her of feet as they spent nights out together dancing. “Chances Are” was one of their favorite songs and the song I chose to dance with my pop to at my wedding. Sometimes, she would surprise my pop with banana pancakes, his favorite (even back then the way to a guy’s heart was his stomach, ha). Sometime during their courtship (yes, courtship….this was the 50s!), my pop gifted this engraved anklet. Thinking back as far as I can remember, I can’t remember a day that my nan didn’t have it adorned on her ankle. 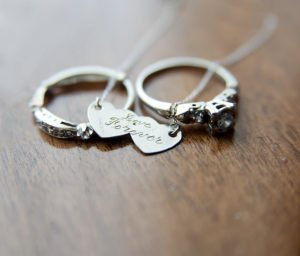 My grandparents were married July 25, 1958. Shortly after being married, they began to start a family, which didn’t take long to grow to a total of ten! With most of their children pretty close in age, my pop likes to joke that sometimes he would just have to walk in the door after work and my nan would be instantly pregnant. Ha.

As my pop spent his years working two jobs to support his family, my nan devoted her life to her children (and later, grandchildren). Although it was quite the feat to care for such a large family (did I mention there were six boys?!), my nan didn’t complain because family meant the world to her.

Around the year 2000 or so, my nan started to grow ill. Her health deteriorated tremendously over the next ten years. As time went on, she required more assistance with daily tasks. Eventually she grew weak enough that she was unable to walk at all and my pop would carry her to the bathroom. I’m sure she would be a little angry that I shared this, but it was that moment when I first saw my pop gently scoop her up, that I promised myself I would always strive for that kind of love.

Just passing 50 years of marriage, my nan lay there in her hospital bed, fighting so hard to keep going, even hours after her life support was turned off. My pop held her hand and told her, “it’s okay”. Moments later, she passed.

I now hold this engraved heirloom, once given by a boy to a girl who he fancied, with no idea how strong their love would one day become. While my heart breaks into a million pieces when I think of her, I’m also reminded of how absolutely amazing love can be. It’s because of them that I believe so strongly in marriage and the reason I strive to one day pass 50 years of marriage as well.

You've made it this far, so that must mean we're going to get along great!

If you think posed pictures are boring and want a wedding photographer who feels like your best friend – You’ve just found your girl!

Ready to say goodbye to boring photos and hello to an awesome experience?! Let’s chat before someone else grabs your wedding date!